Imperial Beach sits on the traditional territory of the Kumeyaay people, who had an established the village of Alyshuwii.[9] Founded in June 1887, the city takes its name from Imperial County, California, a desert climate 100 miles (161 km) east. Farmers and land owners from the Imperial Valley came to the area in the late 1880s seeking cooler weather during summer months.[citation needed] In March 1887, over 2,000 laborers descended upon nearby Coronado, California to construct the Hotel del Coronado, the largest resort in the world at the time. A large number of the workers stayed in Imperial Beach and some would later make it their permanent homestead. The city would incorporate in 1956, operating its own Mayor-council government providing city fire department service and policing by the San Diego County Sheriff's Department.

Imperial Beach has undergone a significant makeover in the last ten years to become more visitor-friendly and commercially viable. In 2004, the City of Imperial Beach began implementing a community redevelopment plan to improve the commercial corridor along Palm Avenue and Seacoast Drive. However, aside from a few smaller hotels, Imperial Beach remains a highly residential city with little hotel or motel accommodation for visitors. Future plans for the city allow for construction of additional hotels along the beach areas of Seacoast Drive. On September, 13, 2010, after many years of planning, demolition officially began on the old Seacoast Inn located off Seacoast Drive. Construction of the new 22 million dollar hotel, now renamed Pier South Resort, a 78-room, four-story, upscale Mediterranean-style resort with restaurant, spa and conference facilities, was completed in December, 2013.

The city has a warm semi-arid climate (BSh), with summer temperatures often in the upper 70s and winter temperatures in the 60s. Because of the comfortable year round temperatures many homes in Imperial Beach are built without air conditioning. Imperial Beach often remains 10 degrees (Fahrenheit) cooler than inland areas of San Diego County in the summer, and 10 degrees warmer in the winter. The city is mostly or partly sunny 323 days of the year, with the wettest months in winter. The Farmer's Almanac consistently ranks the area within the Top 10 Best Weather Cities in America. The Scripps Institution of Oceanography operates a weather reporting station at the middle of the Imperial Beach Pier for sky condition, temperature, humidity, pressure, wind and water temperature data. 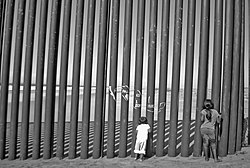 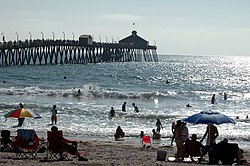 The pier of Imperial Beach

Imperial Beach encompasses nearly 4 miles (6.4 km) of beach and employs a year-round lifeguard staff. Beach volleyball, surfing and body boarding are popular in Imperial Beach with activities concentrated north and south of the Imperial Beach Pier and the Boca Rio beach break, one of San Diego County's best surf spots. San Diego Magazine identifies the Boca Rio beach break as the second best surfing location in the county, second only to Black's Beach and the Scripps Canyon area near La Jolla. The area around Imperial Beach Pier known as Pier Plaza showcases plaques placed on surfboard benches that tell the story of how the city's big waves influenced surfing from 1937 to the 1950s. Nearby Border Field State Park signifies the southernmost beach on the west coast of the United States and allows beachgoers in America to speak through the fence with beachgoers in Mexico, where the beach is called Playas de Tijuana (Tijuana Beach). The city connects to nearby Coronado, California by way of the Silver Strand, a narrow, 7 mile long isthmus. Silver Strand State Beach, a popular beach for camping, bird watching, and bicycling, is located in the middle of the isthmus and includes both bay and ocean beaches.

The San Diego County summer tourist season brings many visitors to the city's beaches each year. For 31 years, Imperial Beach played home to the U.S. Open Sandcastle competition, the largest sand castle competition in the United States, drawing in approximately 325,000 people. The city held the final sand castle competition in August 2011, bringing an end to the annual event and tradition. The city also holds the beach front classic car show every summer and an annual dog-surfing contest. The Imperial Beach Farmer's Market, the only beachfront farmer's market in San Diego County, operates from Pier Plaza every Friday afternoon (from 2 PM - 6 PM November to March) and (from 2 PM - 7 PM April to October) offering local fruits, vegetables and community art. The South Bay Drive-in, the county's only ocean view drive-in theatre, is located just outside Imperial Beach off Coronado Avenue.

Imperial Beach is home to Tijuana River National Estuarine Research Reserve, a National Estuarine Research Reserve, and Border Field State Park.[10] The estuary, located off Seacoast Drive and Imperial Beach Boulevard, is home to many endangered birds and wildlife. This estuary marks the place where the fresh water Tijuana River enters the salt water Pacific Ocean. It is the largest salt water marsh in Southern California.

Imperial Beach has a large military population and is home to the US Navy's Naval Outlying Landing Field Imperial Beach also known as NOLF Imperial Beach. It is bordered on its northern extreme by Silver Strand Training Complex.

The city is one of five Port member cities making up the Port of San Diego, one of America's top 30 U.S. container ship ports.

Kem Nunn's novel, Tijuana Straits, provides insight into the culture of the border and surfing in Imperial Beach and the Tijuana River Valley, and the environmental problems that affect residents of Tijuana, Imperial Beach and Coronado.

The HBO television series John from Cincinnati was about a dysfunctional surfing family in Imperial Beach set against the backdrop of the U.S.-Mexico border. The series (from Executive Producer David Milch, writer Kem Nunn, and director Mark Tinker) was filmed at a variety of locations in Imperial Beach and in the Tijuana River Valley.

On February 21, 2019, Vice News Tonight on HBO broadcast a segment from Imperial Beach about how an extreme tidal surge, known as king tide, affects the local population living along the Pacific coast.[11]

According to estimates by the San Diego Association of Governments, the median household income of Imperial Beach in 2010 was $49,104 (not adjusted for inflation).

In the United States House of Representatives, Imperial Beach is in California's 51st congressional district, represented by Democrat Juan Vargas.[15]